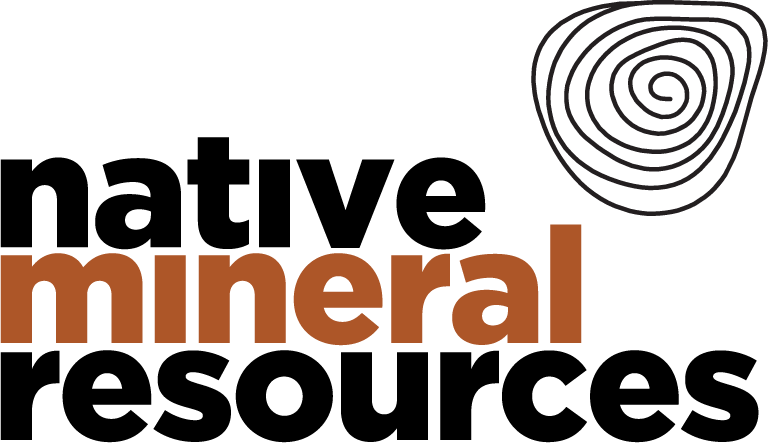 The region is well known for its greenstone hosted mineralisation, however, there is renewed interest in Intrusion-hosted, narrow vein gold mineralisation owing to numerous recent discoveries, particularly in the Kalgoorlie-Leonora region where NMR is also successfully exploring.

The tenements are in prospective intrusive rocks, close to operating mines and offer great opportunity to make significant new discoveries. 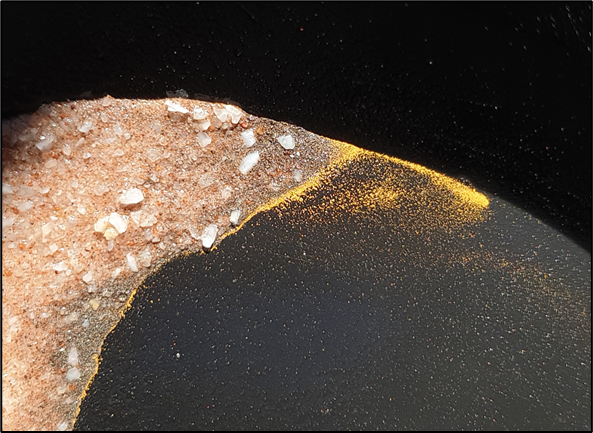 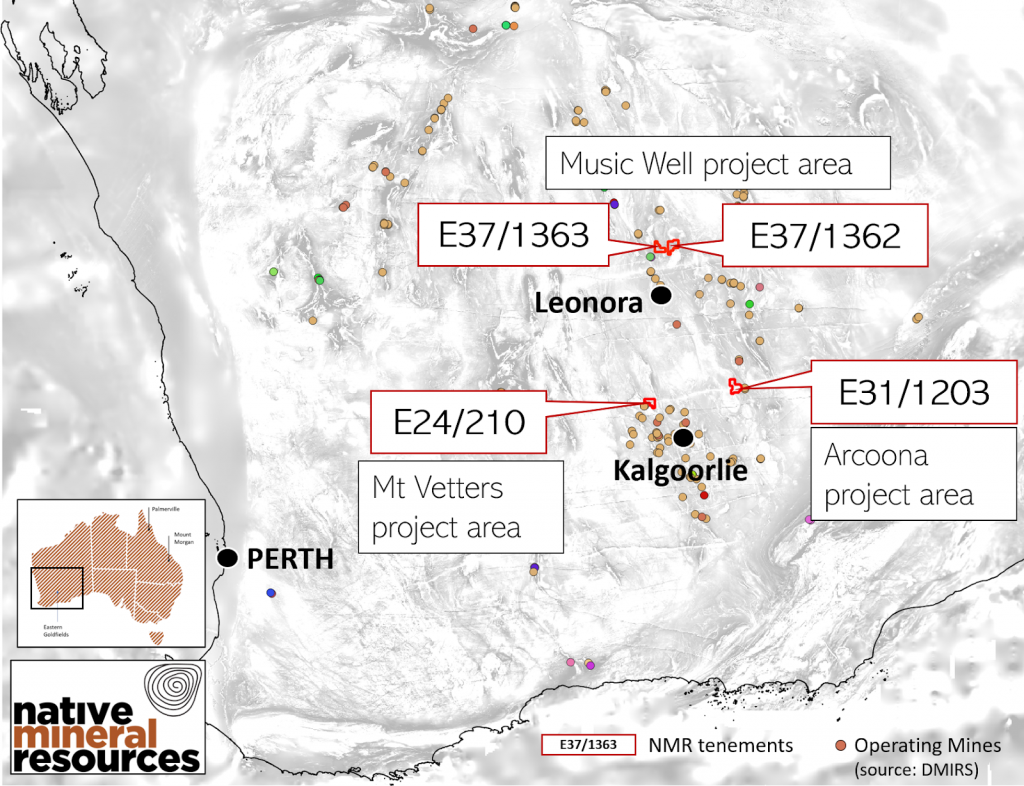 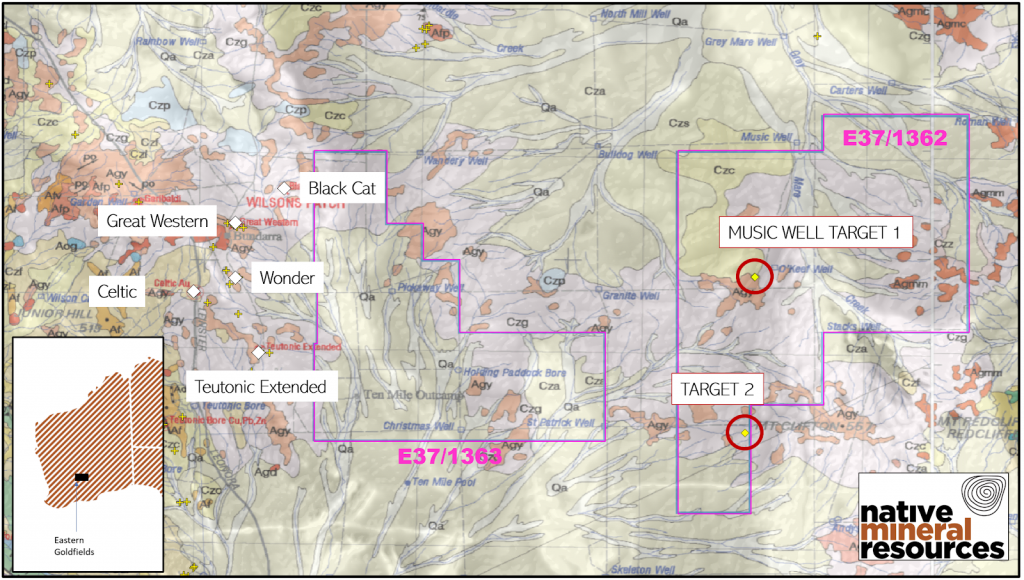 NMR are actively exploring several key target areas defined by previous exploration which includes rock chip samples of up to 34.8 ppm. The gold-bearing samples define a zone over 250m long trending NE-SW. The target vein is hidden by shallow cover at either end.

NMR have already begun to re-define the geology on the Music Well tenement and have recently had major success as demonstrated by:

The NE and SW extents of the target vein dip under very shallow (20-50cm thick soil cover so the full extents have yet to be mapped out, but quartz veins crop out again several hundred meters along strike to the southwest. 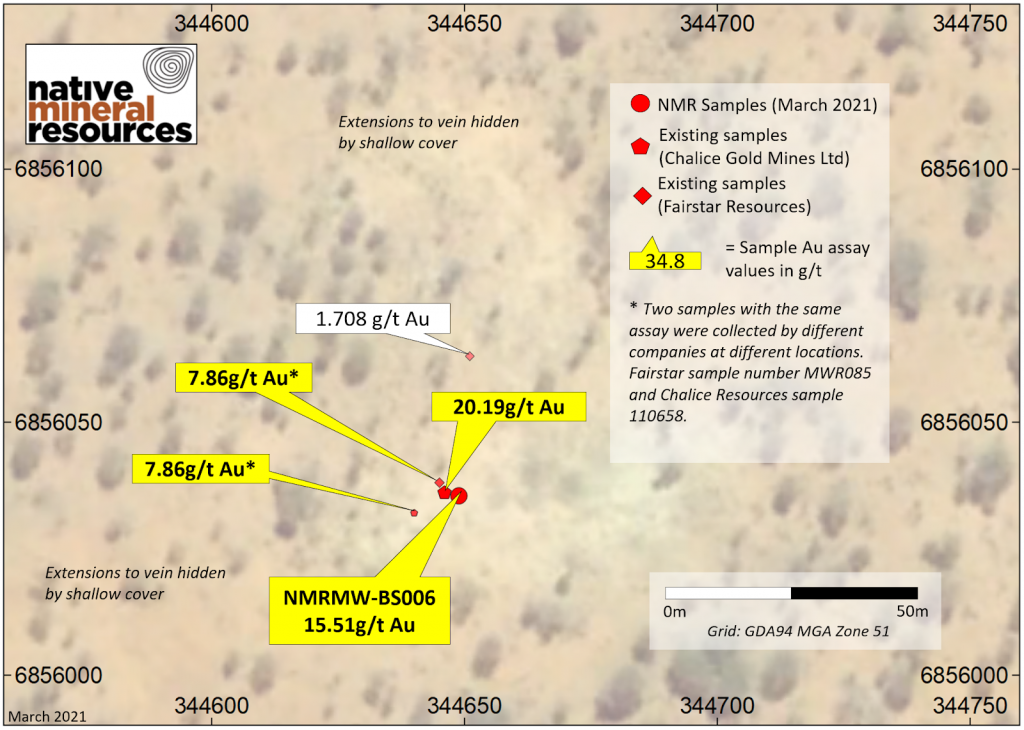 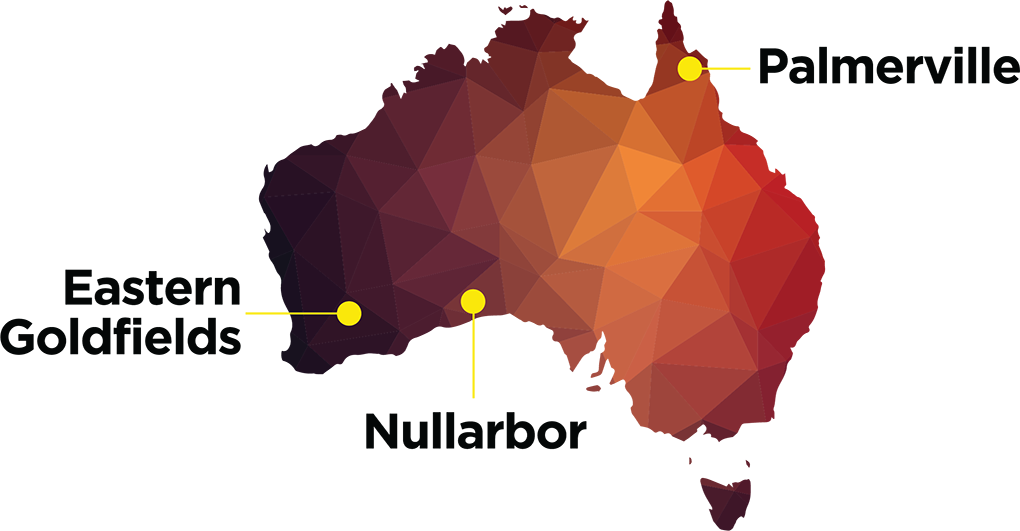 The Music Well project is made up of two tenements (E37/1362 and E37/1363) covering an area of approximately 290 km2 in a high-priority part of the Yilgarn where intrusion-hosted gold mineralisation in the same host intrusive rocks has been demonstrated in high-grade historic open pit gold mines located less than three kilometers west of E37/1362 and only 20km west of the priority Music Well target area.

The availability of new datasets and new interpretations as well as the presence of multiple positive gold indicators places NMR in a unique position to quickly and effectively define the gold-bearing areas in the region and remain outcomes-focused in 2021.

NMR are actively exploring several key target areas defined by previous exploration which includes rock chip samples of up to 34.8 ppm. The gold-bearing samples define a zone over 250m long trending NE-SW. The target vein is hidden by shallow cover at either end.

NMR have already begun to re-define the geology on the Music Well tenement with the identification of poly-deformed metamorphic rocks (referred to in the Yilgarn as “Greenstones”) in what has historically been considered homogeneous granites. 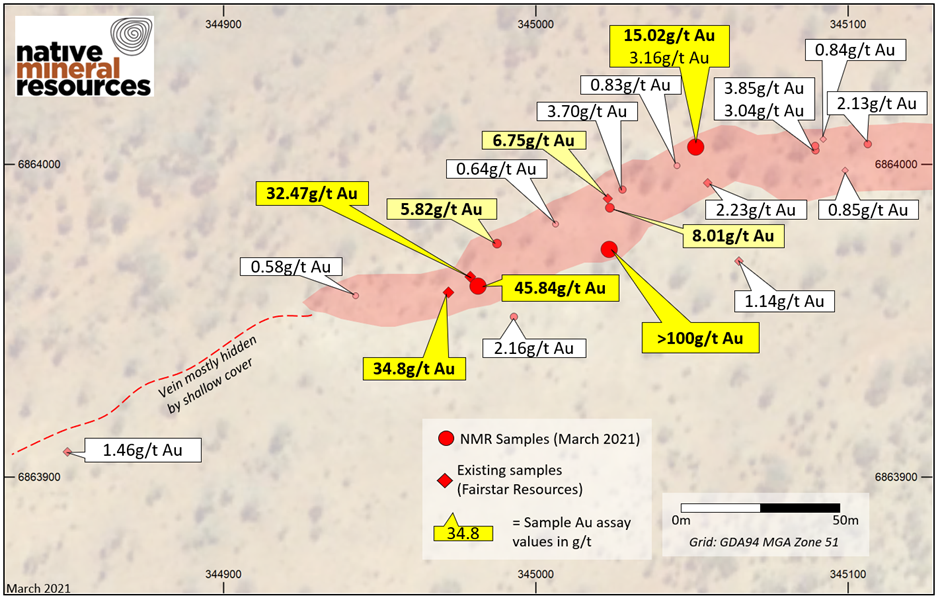 NMR have had similar success at a second vein where a 30g sub-sample (charge) taken from a milled large sample returned a grade of 15.51g/t Au in a region where historical assays on rock chip samples returned grades of over 20 g/t Au.

NMR have demonstrated that the previously obtained high-grade samples characterizing some of the quartz veins on E37/1362 are repeatable and that the veins show evidence of nuggetty style gold mineralisation. 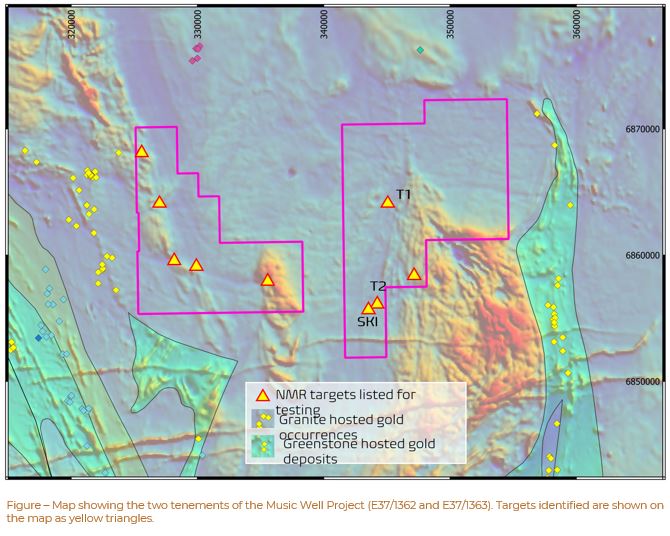 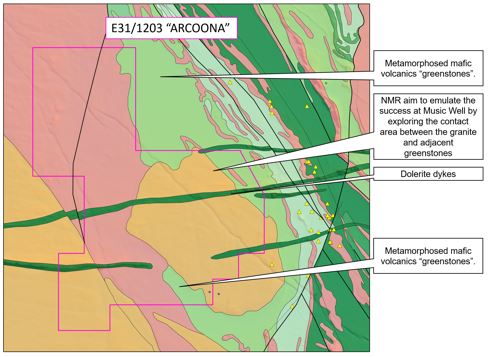 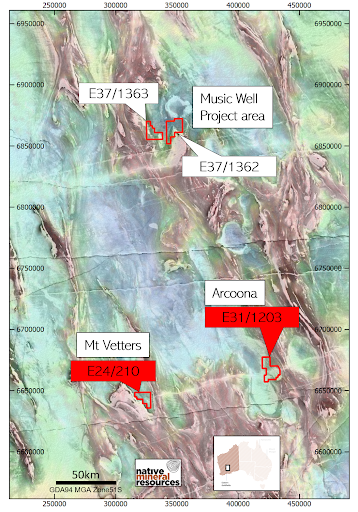 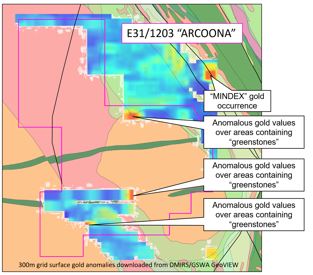 Three greenfields exploration targets have been secured over the eastern Nullarbor allowing NMR to explore for Ni, Cu, Co, PGE’s (E69/3852), as well as IOCG-style copper-gold deposits at E69/3849 and E69/3850.

The three tenements held by NMR in the Nullarbor lie within the Madura tectonic province in south-eastern Western Australia). The Madura tectonic province is interpreted to be part of a continental margin basin that experienced a transition to oceanic subduction and basin inversion after ca. 1500Ma (Spaggiari et al., 2018). Within the Madura Province, potential is indicated for Ni-Co-Cu (e.g. Burkin prospect), and for base-metals, precious metals, and PGEs within the Haig Cave Supersuite of the Loongana Arc (Loongana prospects), and for gold-copper (e.g. Moodini prospect) in ca. 1180 Ma granitoids (Spaggiari et al., 2015).

Limited drilling in this area of growing exploration interest has already demonstrated that the basement rocks show characteristics of other mineralised terrains. Importantly, NMR are the first to explore the area covered by tenement E69/3850 with no previous exploration drilling completed on, or near the tenement.

The target basement rocks lie under a veneer of younger, flat-lying cover rocks ranging from an estimated 50m-thick at the northern tenement to over 400m thick near the southern edge of the Nullarbor plain. NMR are utilizing a combination of geophysics and drilling to complete target definition. A combination of techniques such as airborne magnetics and electromagnetic-based techniques will help NMR “virtually see” beneath the cover rocks.

This underexplored part of Australia is also attracting other large exploration companies including Rio Tinto, BHP Nickel West, Red Metals and Maria Resources. NMR is proud to be one in a group of companies exploring this frontier terrain.

The northernmost tenement covers an “eye” shaped feature that shows remarkable similarity to the Nova-Bollinger “eye” and Legend Mining’s Magnus and Octagonal “eye” structures. All of which are associated with significant Nickel Mineralisation. Exploration efforts are focused on the center, high magnetic anomaly which shows a moderate dipole and a low-angle but oblique relationship with the surrounding mostly planar high magnetic “ridges”.

Figure – Map of tenement application E69/3852 overlain on 40m TMI magnetic map of Western Australia. NMR are targeting the central part of an “Eye-shaped” structure similar to that hosing IGO’s Nova-Bollinger mine in the Frazer Range. Rio Tinto Exploration’s recent application (November 2020) area lies immediately to the east of E69/3852. The high magnetic anomaly in the center of the structure is a short term geophysical and drill target for NMR.  Grid reference is GDA94 MGA Zone 52J. Grid reference intervals are meters east and south.

The target anomaly lies within a part of the Madura Province which, based on interpretations of seismic reflection data from across the Nullarbor, is interpreted to be composed principally of igneous intrusions. The prospective geological setting places the magnetic anomaly amongst key rock types such as those also found regionally associated with the Olympic Dam IOCG deposit (i.e. the Hiltaba Intrusive Suite).

A drone-based airborne magnetic survey has been flown with a traverse line spacing of 50m and a tie line spacing of 500m. The drone was flown at a height of 30m above the ground surface to help refine the predicted target depth of around 100m.

The primary target defined in the survey is approximately 1200 meters long and 400m wide (values above 450nT) and exhibits a pronounced NNW-SSE trend. The main elongate, high-magnetic anomaly is parallel to the NNE-trend of the major linear gravity low featured in the regional, publicly available gravity data over the same area.

The target also lies directly above a major “finger” of low resistivity identified on the regional Magnetotelluric (MT) transect and parallel seismic transect completed as part of a collaboration between multiple geoscience groups including Geoscience Australia, Geological survey of Western Australia and the Geological survey of South Australia. The MT survey shows a pronounced upward-protruding zone of lower resistivity extending from below 100km depth to the surface beneath tenement E69/3850. The presence of this anomaly beneath the magnetic target is significant as it has been proposed that these zones are representative of fundamental pathways for mineral-deposit forming fluids, with a particular focus on IOCG-style deposit formation. With reference to a similar MT survey completed in the Gawler Craton of Southern Australia, Heinson et al. (2018) noted that the “least resistive zone is remarkably aligned with the world-class IOCG-U Olympic Dam deposit and the other two with significant known IOCG-U mineral occurrences”. NMR are taking advantage of these recent advances in mineral exploration and directly targeting the area of highest priority above the MT anomaly identified in the Nullarbor.

The zone of low resistivity in the MT data is also near coincident with an area of low seismicity, another geophysical characteristic observed below the Olympic Dam IOCG deposit. The target, now defined using magnetics, lies directly above a low-resistivity zone in MT and a zone of low seismicity in parallel seismic reflection imaging.

In addition to the low seismic zone, the interpretation of the seismic reflection data presented by Wise et al., (2016) shows a major E-dipping, lithosphere scale structure below the site of the MT anomaly and below NMR’s target presented here.

The southernmost tenement covers a coincident magnetic and gravity high. The target shows a distinctive magnetic peak surrounded by a low-magnetic/demagnetized “halo” making the target appear as a bullseye. NMR will focus its exploration (geophysics and drilling) exclusively on the magnetic high and surrounding “halo”. The target is under cover and will be the focus of geophysical surveys prior to drilling. 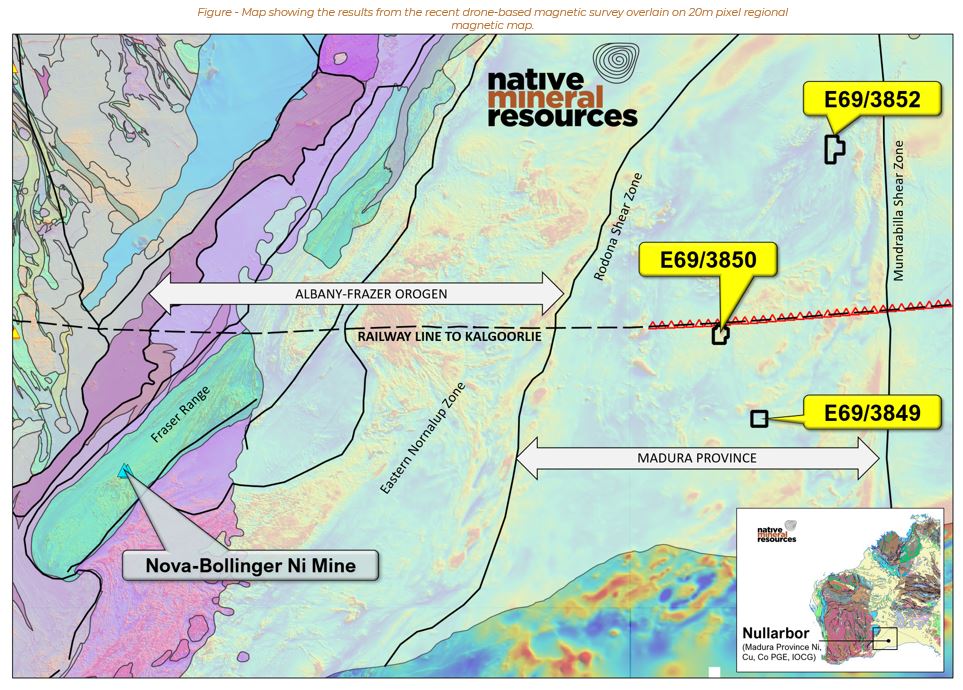 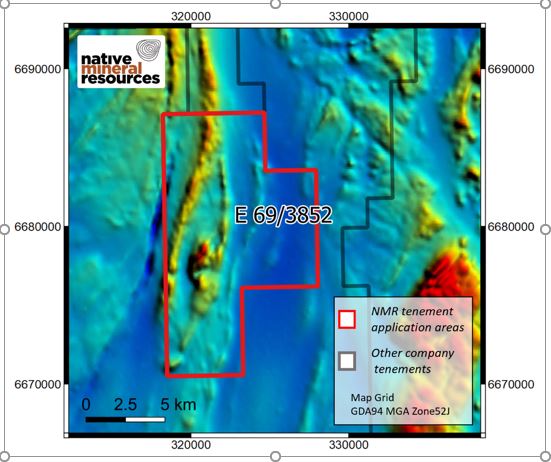 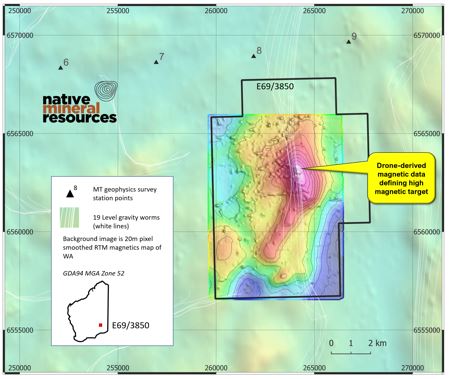 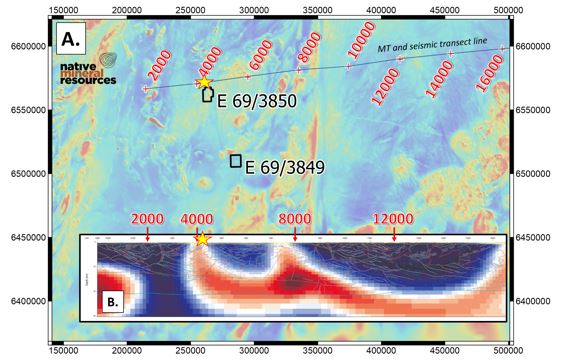 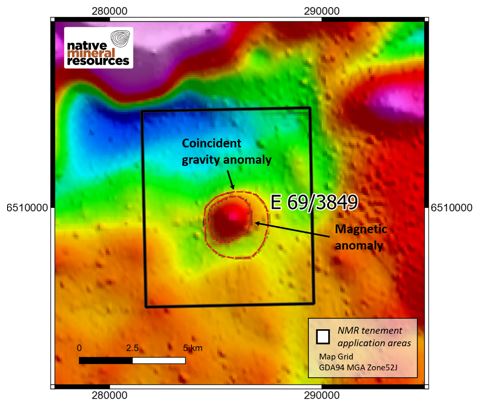